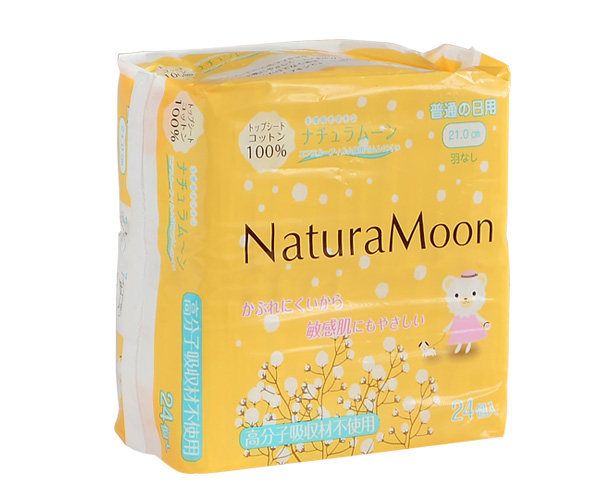 ★Quasi-drug
NaturaMoon's napkin is the first product that is made from ""100% cotton top sheets + super-absorbent polymer free"" and that has made such features possible among the quasi-drug approved napkin in Japan.
★100% cotton non-woven material on top sheets
Cotton non-woven fabric, gentle on your skin, is used on for top sheets which touch women's delicate skin. It prevents rashes and even gentle on sensitive skin.
★Super-absorbent polymer free
Soft cotton-like pulp with high absorbent is used instead of super-absorbent polymers, which absorb liquid and form it into gel.
★Not stuffy
Uses air-through film with good breathability.
★Oxygen bleach
To be approved as quasi-drug, there are strict rules. For example, the surface (the side that touches your skin) of the sanitary napkin should be white, there should more or less be no smell, and it should be free of contaminants. NaturaMoon series sanitary napkins are oxygen bleached by sodium percarbonate, which is said to be environment friendly.

*These voices are based on personal opinions. Experiences and effects may differ among individuals.